Ayurveda is an ancient practice of health care which has been mentioned in the most respected and revered scriptures of Veda more than 5000 years. There are mentions of instructions to maintain the overall health of the human body in the Atharva Veda. The learning of Ayurveda have been derived from this information. There is a great connection of Ayurveda and Kerala which can be observed when you visit the state. 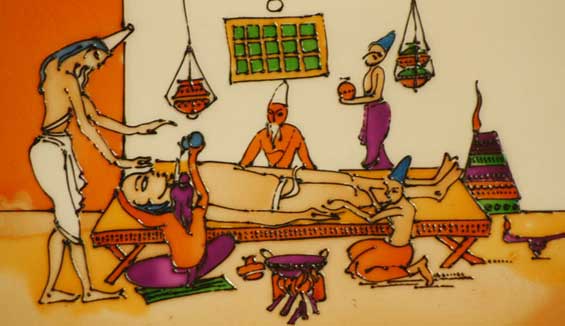 Even the history stands testimony to the fact that Kerala has clung on to the traditions of Ayurveda and still practice it for their well being. It therefore not comes as a surprise when you see most of the resorts and retreats offering Ayurvedic treatments to the tourists. Delving deeper into the Ayurveda history we find many facts that support the Kerala’s association with Ayurveda and its practices.

Ayurveda, as we all know that is a holistic system of healing and treatment practiced since ages. It has eight specialized branches which are similar to the eight branches of western medicine practice. Those physicians who were well versed with all the eight realms of Ayurveda were called Ashtvaidyas and they were the ones who took the gruelling task of interpreting the scriptures of Atharva Veda, collecting the information and organizing them into what they called Ayurveda.

Literally, Ayurveda means “science of long life” as it focuses on practices which enhance the wellbeing and longevity of humans. The Ashtvaidyas lived in and around Kerala, probably because of the abundance of natural herbs and trees which were the primary source of the Ayurvedic medicines. Another reason was the climatic condition of Kerala which was just congenial for Ayurvedic treatments.

Origins and the Legends of Ayur Kerala

The association of Ayurveda in Kerala began when a physician from Sindh province came to Kerala in search for natural herbs and trees as Kerala had abundance of such medicinal flora. The system of medicine introduced by him were adopted by the physicians and healers in Kerala and as they were the experts of the eight branches of Ayurveda, they came to be known as Ashtvaidyas in Kerala. The medicinal culture propounded by the Ashtvaidyas flourished from the 13th Century to the 17th century, when they also enjoyed the patronage of various rulers.

Initially, there were eighteen families of Ashtvaidyas in Kerala but the counts have come down considerably now. Another school of thought which is slightly mythological is that Lord Parshuram was responsible for bringing Brahmins and Namboothiris who were called the Ashtvaidyas. There are various such legends which are different from one another, but the crux of the story remains the same.

Gaining the extensive knowledge of the eight branches of Ayurveda was a rigorous task and the disciples had to devote their time and full concentration to learn the nuances of Ayurveda. The knowledge of Sanskrit, poetry, grammar and drama was necessary to understand the intricacies of the subject. Only after this rigorous training did the disciples would be accomplished Ashtvaidyas. Kerala, hence enjoys a rich cultural history and has been the guiding star in Ayurveda.

If you are looking for Ayurveda Nutrition Courses in Kerala, contact Greens Ayurveda right away. Call us at +91 496 2504334 now!!